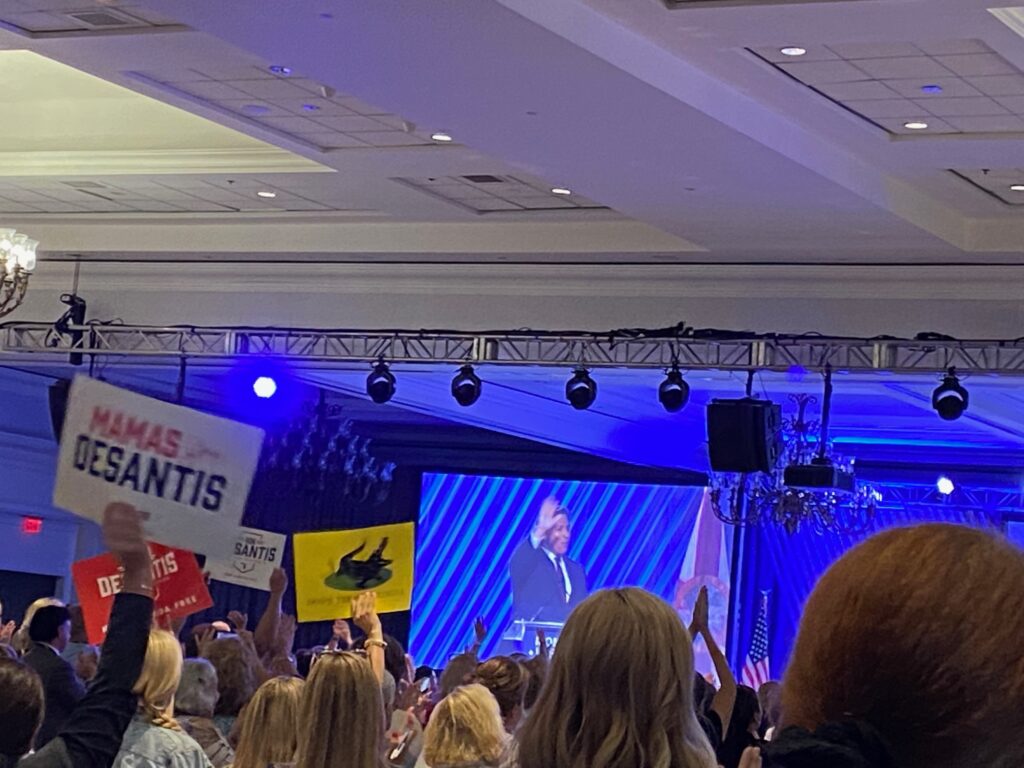 TAMPA — Claiming that Florida schools are undergoing “leftist indoctrination,” a “leftist agenda,” and “sexualization of children,” Gov. Ron DeSantis called on hundreds of members of “Moms For Liberty,” gathered in Tampa Friday, to fight.

“You’ve got to stand up and you’ve got to fight,” DeSantis said in a keynote speech to the conservative, nearly all-white audience, estimated at 500, in a Tampa hotel. “You’re going to take fire. They’re going to shoot arrows at you.”

The governor, running for reelection, won repeated cheers and standing ovations from the members, wearing badges identifying them as being from states as distant as Hawaii and New York.

“They cannot wait to vote for him for president,” said Moms For Liberty co-founder Tiffany Justice, introducing DeSantis at the Friday morning keynote. The audience stood, cheered, and waved “DeSantis” signs and “Mamas For DeSantis” signs — the latter referring to a group recently founded by First Lady Casey DeSantis.

DeSantis focused on “the free state of Florida,” where he largely has blocked COVID protocols recommended by federal health authorities and pushed new laws empowering parental authority over school boards.

“Our school systems are for educating kids, not indoctrinating them,” DeSantis said, citing his administration’s rejection of “woke” math textbooks and its ban on teachers “forcing sexuality and gender ideology in elementary schools.”

Florida Democrats, assembled in an adjacent hotel for their annual leadership conference, countered that DeSantis is lying about educational achievement in Florida to recruit conservative parents behind his political ambitions, which include an anticipated run for the presidency in 2024.

Brevard County School Board member Jennifer Jenkins, a teacher and Democrat who says she was harassed and threatened for her pro-mask position at the height of the pandemic, said Florida schools are 9,000 instructors short as the fall term approaches.

And they rank 43rd nationally in education funding and 48th in average teacher salaries — not because of masks, critical race theory, or gender issues touted by conservatives, she said. (National Education Association research shows Florida’s average teacher pay at $51,009, ranking 48th in the nation, based on 2020-21 data. For per-student spending, the NEA data show $10,703, ranking 44th in the nation.)

“Our teacher shortage is a DeSantis decision,” Jenkins said, arguing that Florida schools have fallen behind during 20 years of leadership mostly by Republicans. Jenkins said she based her support for temporary masking in Brevard schools on local evidence, including the COVID deaths of 10 staff members.

Notably, Jenkins defeated her Republican incumbent opponent, Tina Descovich, who soon after joined with two other school board members to found Moms For Liberty. Jenkins said voters chose her over Descovich because she supported masking in schools, as they did.

“It’s not about kids. It’s about an obsession with power,” said Democratic Party Chairman Manny Diaz, who argued DeSantis and other top Republicans are, like former President Trump, fueling conspiracy theories that erode public trust in science, the judiciary, and professional news media.

Scott Hottenstein, public education chair for the Florida Democratic Party and a former civics teacher, said conservative opposition to “critical race theory” is based on such a conspiracy.

“We don’t teach critical race theory in Florida,” Hottenstein flatly stated. “Parents want all of history to be taught … without being censored by politicians.”